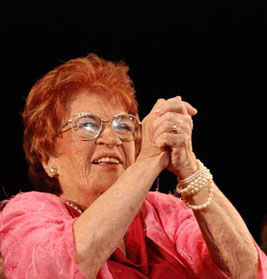 Mella Theater in Havana shows itself in the best light to celebrate the passage through life and artistic work of this “Lady of the nine decades, who keeps her clarity, toughness, loyalty and sensitivity for the media, which has devoted her life as she used to say” beyond life”.

This simple but lovely woman has been in the preference of all people who admire and recognize her, from its passage through advertisements, comedies and dramatic leading roles for over 40 years as Rita Paranganillo in the program Alegrias de Sobremesa.

With his big glasses, walking slowly, and vitality in his eyes, Martha Jimenez Oropesa still recognizes the quality of the humor that comes from the environment, cultural traditions, and language, of being Cuban that identifies and differentiates us in the world.

That is why during the tribute to undertake the day before in the Mella Theater, Rita and Martha that matter, he gave the people of Cuba because wherever she goes, from Pinar del Rio to Guantanamo, he professes an infinite eternal love and gratitude.

“The popularity is not achieved, the popularity gives you the people, and you must feel the most awarded person of the world when the people, offering love,” and told me one afternoon in May 2008 recognized that waiting for a bus to go Radiocentro.

Martha Jimenez Oropesa, our Rita, will entitle Alejo Carpentier Medal, the Raul Gomez Garcia Distinctions for National Culture and Majadahonda Distinction for her internationalist mission in the Republic of Angola, the Artist of Merit and the National Radio Award for the whole life, the National Award of Humor in 2009, one of the most versatile actresses in the history of the Cuban radio.