Now, when the May flowers I remember the anniversary 94 of his birth , I assume unforgettable experiences of the long investigation for five years I realized , almost daily, with the family of Celia who survived (sisters and brothers, cousins and premiums) , the long days by collecting photos, documents, firsthand accounts of the great woman , who in my opinion is and will be an inexhaustible source of story that we will return to, again and again , seeking truths about events known or unknown , that shook Cuba.

It was the evening of a day in 1988 when, without warning and without knowing her or the other sisters Celia, he knocked on the door of the house of Griselda Sanchez Manduley. When opened, after nearly a minute of waiting was interminable, the unexpected happened: before me there appeared a woman of noble look and cozy with a similar treatment and Celia that left me paralyzed.

I immediately introduced myself as a writer of occasional radio and published literary prize but with the intention of witnessing the life of Celia for whom he deeply admired as a human being and for its deep roots Marti books.

After inviting me to enter the house and close the door I went to a second amazing moment. Before me, with diligent eyes were in the room the other sisters Celia and waiting. He had arrived in the middle of a family reunion unknown. Griselda was kind enough to introduce me, with the same data that the author had reviewed him moments before. Did not know then how momentous for my seconds would happen.

In a trice the family sat down and moved the compass of my body into a corner of the room where a wicker chair moved to my right a small glass table lamp decorated with a brief and some books with a clean ashtray and transparent , gave me shelter. I sat as if nothing before the astonished eyes then gave way to laughing faces.

Without understanding that collective gaze interbreeding secret messages for me. I remember wondering: Is something wrong? . And when the voice was Griselda, with soft serenity and sweetness that would give me for the next 5 years and the most truthful information research, unveiled the mystery:

– Is that you have sitting in the chair Celia and no one had done since his death which means that a light has illuminated and you write a beautiful book about my sister – . Ended when he spoke those words , which would be great inspiration for extensive and complicated investigation that I intended to make, I could only smile and who knows if I said : That ‘s Life!

Finally my book A girl named Celia, who years later became a soap opera that broadcast Radio Progreso Art and at different times was published in l996, in joint edition of Pablo de la Torriente and t Pueblo and Education publishing house.

I remember a Griselda to take the first copies, the first thing I did was stop on the chair Celia, I kissed my book as unique dedication to the flower that survives. Griselda tearfully hugged me and said you understood the light of my sister. That was one of the most unforgettable moments of my writing life infinitely grateful that life. 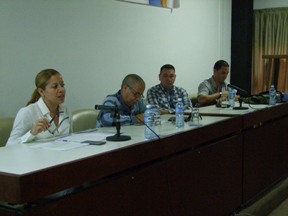 “I want to meet Fidel”