Patrick Rankhumice, charge d’affaires of the South African Embassy in Havana, said this is one of the initiatives around the world to honor Madiba, who died last December.

The date in Cuba will be the day after the one selected in 2009 by the UN General Assembly as Nelson Mandela Day, to coincide with the birthday of the leader and first president of democratic South Africa.

Rankhumice explained that the goal is that in each nation, 67 minutes in the service of others are performed, in memory of the 67 years Mandela was dedicated to public service, dedicated to work for the benefit of the community.

Meanwhile Carlos Gattorno, Marabana president, told Prensa Latina they are available to include this race in the 2015 official calendar, which he considered an honour.

This will be at the consideration of the Mandela Foundation, coordinator of the initiative by the Cuban Sports Institute (INDER) and the South African Embassy in Havana. 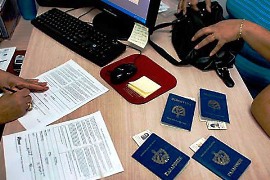 Adjustments in Cuba on migration do not respond to external impositions

Local storm causes damage to a community of Sancti Spiritus

Tina Modotti: An inspiration for radio