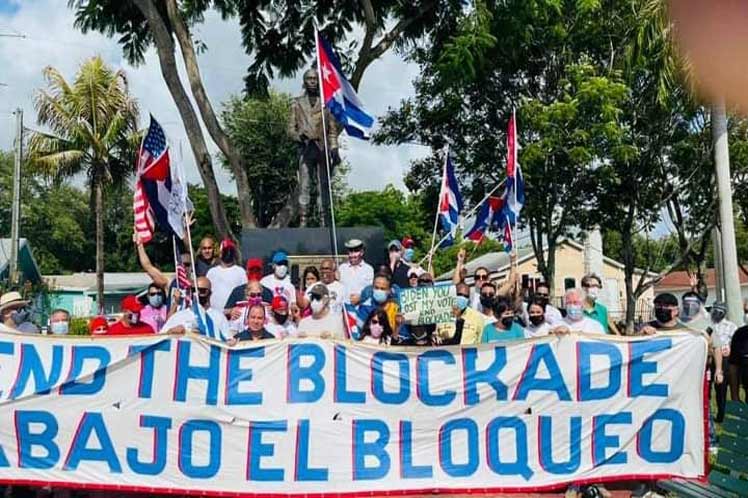 With cheers to the ‘Bridges of Love’ and the ‘Cuban Family’, as well as exclamations of Down with the blockade!, the assistants ratified they will continue to exert pressure until the government of President Joe Biden fulfills its promise to change its policy towards Cuba.

Gathered earlier at the monument that remembers the national hero of Haiti, Toussaint-Louverture, the participants said they also dedicated the day to the Haitian people, who suffered a devastating earthquake on August 14 and days after the impact of the storm tropical Grace.

Car and bicycle caravans have taken place in recent times besides Miami in New York, Los Angeles and Seattle, among others.

On January 31, the Cuban president, Miguel Díaz-Canel, thanked Carlos Lazo from his Twitter account for the gesture from Bridges of Love.

‘Cuban patriots, wherever they live, understand that the blockade is a crime against their people,’ Diaz-Canel stressed.

Actions against the illegal and unilateral US siege of the Greater Antilles are growing here and especially now in view of Biden’s breach of his electoral promise.

In almost eight months as president, the Democrat maintains in force the 243 measures adopted by his predecessor, Donald Trump, which tightened the economic, commercial and financial blockade of almost six decades, aggravated by the scourge of the Covid-19 pandemic.

The blockade received, once again, the majority rejection of the international community on June 23 at the UN General Assembly, when 184 of the 192 member countries voted for its elimination and the United States was once again isolated along with its inseparable ally Israel.

Cuba Reiterates Solidarity with Palestinian Cause, Calls for Peace