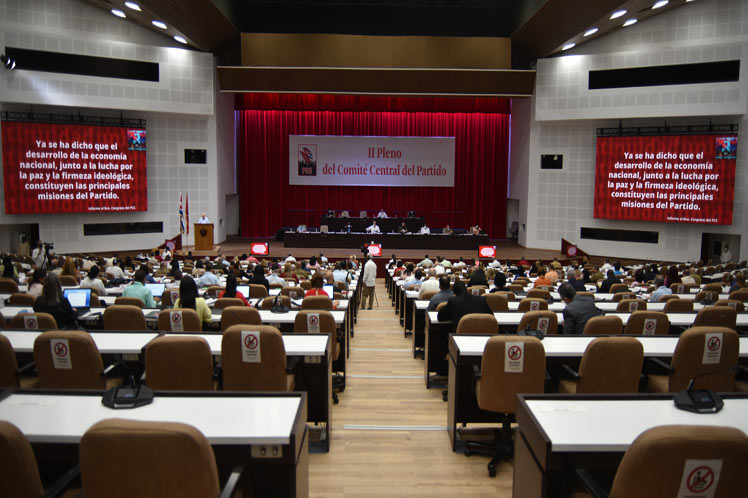 In this sense, he referred to some main topics of the debate, among them the strengthening of people’s power, the political-ideological work, and the role of the leaders as architects of the transformations and guarantee of continuity of the Revolution. The eve, Díaz-Canel emphasized the need for the exemplary nature of militants and strengthening unity with the citizens’ welfare in the face of attempts to subvert order in the Caribbean country.

The Head of State stressed the priority given to the care of people in vulnerable conditions and defended the systematization of the dialogue between the island’s top leadership and all sectors of society.

The secretary of Organization and Politics of Cadres, Roberto Morales Ojeda, presented the central report of the meeting, which brings together references on the development of the economy and the application of agreements of the 8th party Congress, held between April 16 and 19 last.

Participants in the meeting of the Central Committee approved said document and the modifications of the Statutes of the PCC, which ratify the fundamental principles of the Party as the superior leading political force of society and the State.

The II Plenary also gave green light to the program for the transformation of political-ideological work, with theoretical and methodological tools in order to respond to current challenges and forge an emancipatory culture against all forms of prejudice and discrimination, in favor of national unity.

Those present approved the general strategy for cadre policy in the 2021-2026 period, in addition to analyzing a diagnostic proposal and a plan to strengthen people’s power in Cuba.

Cabrisas Meets with Minister of Finance of Slovak Republic

The Cuban people is the main protagonist of the epidemiological battle