Due to Moraima’s modesty, it was not easy to me to get a brief biography from her; because she undoubtedly deserves to be part of that huge and select group of radio workers in radio history.

Moraima´s origin is humble, a farmer´s tradesman  who became a peasant. Her childhood took place in a countryside village known as Barajua, of which I had not ever heard before, in the municipality of Cueto in Holguin province. I remember once she made the car to stop, during one of the many tours I used to do in that region, to show me the house she lived in and still remains in that place. There she told me with a sound pride how happy she was besides her family in that small site of the Cuban countryside, already forgotten by many people.

She was lucky to have been born in 1959, the same year when the Cuban people together with their leader Fidel Castro – Moncada, Granma and the Sierra Maestra –  revive our apostle Jose Marti, after so much shed blood shed in cities and mountains for  seven long years of fighting.  It was 1959.
For that reason, Moraima´s childhood was filled up with the joy and the euphoria of  those years after the revolutionary triumph.

Moraima began the elementary school in 1964 and had an outstanding participation in the school cultural activities, reciting poetry of deep patriotic content. While recalling those moments of her life, she said that “La niña de Guatemala” (the girl from Guatemala) was her favorite poem.

In 1970, she studied at Ruben Casaus Secondary School. During her time at the secondary school, she was chosen as a student leader at the Cuban Federation of Middle-Level Students (FEEM) and joined the Youth Communist Union (UJC) at the age of fourteen.

She actively participated in school plans to work in mountainous remote areas, like “Pinares de Mayari”.
Due to school results at school and her participation in the students’ activities, she was given the opportunity to continue her high school studies in a scholarship at the Juan Jose Fornet Piña Institute in Hoguin, in 974. There, she was selected as Secretary of the UJC Leading Committee and member of FEEM Municipal and Provincial Secretariat.

Manuel Ascunce Domenech Pedagocial Institute was created in 1974 and Moraima studied Spanish and Literature. She finished her studies after teaching in rural schools in San Andres School.

In 1977, Moraima began to work for the Radio as a University graduate to support the UJC work at the provincial station Radio Angulo in Holguin as secretary of this organization where she also acted as an office clerk.

But the passion for radio  took hold of her and soon her interest in the artistic work settled down. Then she joined media refresher courses at the subsidiary training school of the Cuban Institute of Radio and Television, a good and nice venue at the Holguin Telecentre premises.
There she got several courses, among them scriptwriting, direction and program counseling, which were preparing her technically as a future provincial radio professional. While being an anchorwoman for  youth shows, she wrote and directed other shows at the  Angulo Radio Station, as part of the training courses and practice.

For her educational, cultural and professional level Moraima was selected at that time as president of the first radio Artistic Council and she was coordinator for the artists´s evaluation process carried out in Holguin and led by the Cuban Institute of Radio and Television (ICRT).

Nothing has been indifferent for Moraima regarding radio broadcasting.  She was a radio advisor for juvenile and childrens shows and music script chief for juvenile and and children shows. In 1983, she was appointed as head of the Programming Department at Radio Angulo station and two years later she was promoted to Radio Programming vice-director in Holguin province, where she was in close contact with production and training processes.

Her dedication, along with young talents, made Holguin radio soon acquire a greater reputation due to the quality of its programming and its professionals. This was a time for a faster radio development, which allowed her to participate in multiple theoretical and practical events related to radio including the National Festivals where Moraima won several awards as a  member of production teams, including: as an advisor of Educando Hacia El Futuro, and also as children’s program director Monte de Espumafoam, and the news show Micrófono Abierto…

Due to her expertise on radio programming and in general, the National Radio Directorate promoted her as Provincial Radio Director, to conduct the Holquin radio stations, at a very complex time from 1991.

After a long period of work over nineteen years, Moraima is still working, now as an experienced professional, but with renewed enthusiasm.

It is really difficult to summarize Moraima’s achievements as provincial director in Holguin. She showed her professional talent when creating four municipal radio stations and six radio studios in six other municipalities.

As recognition for her work, Moraima was granted, for three times,  the Radio Station National Vanguard between 1996 and 2000, among other awards.

For the achievements attained by radio programming, Holguin province became the venue of two National Radio Festivals in the years 1994 and 2004, in which were exemplary regarding planning and organization.  Holguin radio remained within the best five all over the country, according to an annual assessment carried out during Radio National Festivals.

For her brilliant career, Moraima was a Party Provincial Committee member over 12 years, from the  year 1994 to 2007 and also was an outstanding government official and the ICRT for eight times.

She has been awarded distinctions such us the Raúl Gómez García, August 23rd, September 28th , among others.

For all the aforementioned and as she devoted 30 years of life to the radio, 19 of them as an outstanding  Radio provincial director,  Moraima López León or “La Mora”, as her colleagues call her, is part of the radio memory forever.

A translation by: Silke Paez Carr 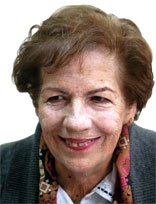 María Dolores Ortiz: It was Cepero Brito who proposed me as panelist (II)