From early attraction to other stories in faraway places, even in other geographies, age allowed him to feed the imagination, and most importantly, he developed the ability to dream and cause those feelings in others.

A Camagüey is recognized by the tradition of being the cradle of speech in Cuba. Hence it is natural Josefa, this woman of great initiatives, feisty. We have much to thank for boosting the creation of new stations and the restoration of other, he promoted the dramatic production, festivals supported, defended vehemently as radio communication bridge big impact with the audience.

Proponent of the National Festival of Radio, turned them into instruments and tools, not only for the recognition of the creators, but to the theoretical exchange to flow as a driver in the development from the provinces to the municipalities of genres and programs achieve artistic quality.

“Women announcers in Cuba” reaffirms the role of empowerment and females. Josefa, National Radio Award is an example of the role of women in the emergence of this medium in all provinces.

The text includes testimonies of over a hundred women that throughout the island have been leading voices of the system of Cuban radio and television. This title, along with others which include “Faces that are heard” and “Silence … speak” they are the result of journalistic skills and mastery of the medium.

He has also received, among other significant awards: the Order Ana Betancourt, the Distinction for National Culture, the National Radio Award for the work of life and status of Artist of Merit of the Cuban Radio and Television.

Among his best qualities extraordinary sense of creation that consecrated as an artist who has, among other awards, three awards from the Caribbean Broadcasting Union equal number of cultural documentaries for radio, several Caracol granted by the Union of Writers and Artists Cuba (UNEAC) and awards July 26 the Union of Journalists of Cuba (UPEC).

Moreover, is a National Artist Award of Merit Radio and ICRT, Ana Betancourt holds the order and was selected as a featured table of the Cuban State.

Large family roots, owes the love of her parents and her husband thank you to life and maintains the challenge of fighting to continue following a winner who always accompanied by the sweet sound of the radio. 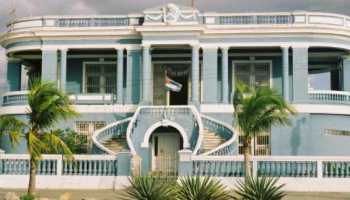