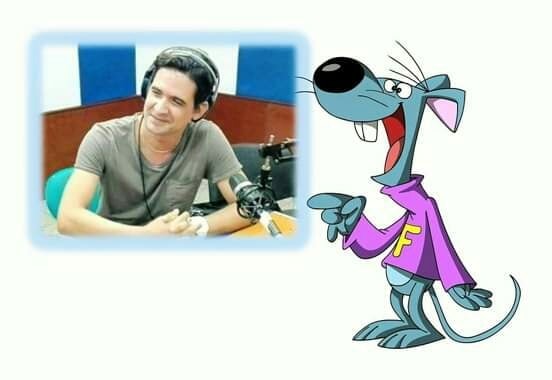 Tía Tata Cuenta Cuentos, was the best way my mother had to get me going from one dream to another, considering that this program  was actually the extension of a happy dream.

And so much I learned from the Principito. I still have that child inside me. I am so grateful to programs like the one that my mother tuned in for me every morning. And others then, before and later.

The exceptional Consuelito Vidal premiered it on the radio in the 60s (it was already a fact in 1966), whom I also knew from Amigo y sus amiguitos, created and directed by Erdwin Fernández in 1962.

She was the first Tía Tata ,which would continue on television on Tuesdays at sunset (because Amigo…  was broadcast on Thursdays) until almost the turn of the century, in different  broadcasts and dimensions. She was replaced by other actresses such as Gina Cabrera and Carmen Pujols.

On television, Tía Tata would only show her legs, next to Chispita, a puppet with the voice by Martha Falcón and later by Nilda Collado; those images on my retina are unforgettable, likewise that of Los Yoyo Band,  also made up of puppets, for which  Consuelito, Alden Knight, Aurora Basnuevo, Miriam Vázquez and Ana Nora Calaza were not only singers but also actors.

Radio, for its part, enhanced in particular my creative visual imagination, which has been basic to my work, through my perception in that family especially of the aunt (Tía), her nephew Chispita and the substantial teachings learned through their nourishing and entertaining narratives.

It was the best school and sometimes with further scope, without didacticisms or formalities, because of the art with which it arrived. Written by Celia Torriente and with music by Enriqueta Almanza, who had written lyrics and music for the famous Barquito de Papel, respectively, and on television, the emblematic Aventuras, then all live programs.

Tía Tata was aired on Radio Liberación,( very popular from the 60s to the 80s) , from Monday to Friday, under directors of the stature of Oscar Luis López and Xiomara Blanco, who combined the quality of the actors with the mastery of effects, recordings and musicalization, as required by this broadcasting mean.

And with Tía… on the dial, he would listen to La cajita de música, in which Elena Bolaños was the grandmother who would propose to her grandchildren to listen to recorded music, with works by the Argentine singer-songwriter, poet, writer, playwright and composer María Elena Walsh, for example, or others; on other occasions he would he play the piano and sang for the children.

And this awakens me to the child that I am today, when in Cuentos para Federico (Radio Progreso, Monday through Friday, from 5.30 to 5.45 pm), I listened to Walsh (1930-2011); and it is not by chance. Not in vain she is considered a “living myth, cultural hero and coat of arms of almost all childhoods”, and her work is compared to that of the great classics of art for children of all times and countries.

We made ours his Canción de Titina, La pájara Pinta, La mona Jacinta and the song of the vaccine (or El brujito de Gulubú), almost in unfair and even cruel, but involuntary anonymity; that is how the great individuals are like : they only triumph when they have dissolved in each and every one of us, multiplied like their apostles.

And now with Federico we could listen to another of his works: The country of geometry, with its Rey Compás and its round flower, on a radio that for a century has not required a passport or luggage to travel between countries.

And it happens not only with Walsh: from Federico we have heard much more about the incredible work and authors for children from the most diverse corners of our Latin America, at least … without seeking much and therefore, being afraid of being unfair again.  I remember from Argentina, Peru, Chile, Brazil, Andean legends… from other Cuban regions, such as Holguín… the Titirivida Puppet Theater… the story “Entre el cielo y el mar”, by Nelson Álvarez Guerra; El zorro que devoró una nube, Cucha del águila, Déjame que te cuente; El miedo, by Edel Arriiagada; Había una vez … truz; El pollito miope by Olga Soledad Martínez; La resurrección del papagallo. Extrañas visitas, by Yeriber Pérez; Palabras al viento, La gallina blanca, by Elvia Pérez…

One appreciates so much and thank my friend Federico for allowing us discover the infinite score of valuable authors, by whom, in a wholesome way, we have let ourselves be carried away by his works. But now we wish to distinguish other living myths so as not to be unfair, much less cruel … because herein is writing a child who, not realizing it, feels his lips in flame, under a spell of love for those who make us grow vibrant and sensitive; the child who is never asked when something is dedicated to him, but who at the end will be the one who marks the transcendence. And this is due to the fact that those radio programs in my childhood were the protagonist  essence in my “prodigious decade.”