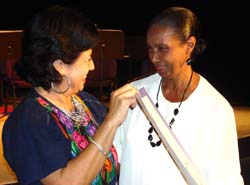 She worked for 7 years in those plans as teacher, revolutionary instructor and social sciences methodologist. For her results she was granted the condition of exemplary instructor.

At the ending of 60’s and being loyal to her vocation she registered in the course of radio announcers, organized by the Cuban Institute of Broadcasting. By demonstrating her exceptional qualities, even before finalizing, she started working on Radio Reloj as radio announcer.

Immediately she participated in television programs such as Tele cierre, Escenas norteamericanas and especially the National T.V News by substitution of Manolo Ortega who participated in the harvest of 10 million. This outstanding radio announcing also worked in Radio Progreso in the program Ayer, Hoy y Mañana.

She graduated in Journalism at the Havana University. Fernandez Corrales represented our country in Moscow for the day of the Cuban television in the Soviet Union.

For 38 years in Radio Reloj she has been one of the radio announcers of the special program EL MATUTINO, she was head of radio announcers department, she was also member of the Artistic Council of Radio Reloj, member of the Technical Advisory Council of this radio station and the Cuban Institute of Radio and Television (ICRT) and she also participated part in the two assessment processes as president of the jury for the eastern provinces and Pinar del Rio.

Because of their great personal and professional merits, which made her one of the best presenters in the country, confirms him boasts of many, the following awards:

She was granted in many occasions as the Best Female Voice of Radio Reloj in the National Radio Festival.

Medal as Awarded Worker of Culture.

Diploma: 3 Awards at the Provincial Festival of the COCO, for her radio announcing work.

Diploma of Culture for her outstanding contribution in the cultural development of the Cuban nation.

Certificate signed by Fidel for active participation in the Open Forum of Youth of May.

Diploma awarded by July UNEAC Lot for contributions to radio and the national culture.

Recognition for outstanding participation in the work of artistic evaluation.

Mirta Aleyda Fernandez Corrales was born June11th in Havana City. In 1969 began a course of radio announcing with excellent teachers and Rafael Fabregas, Hector Fraga, Enrique Goizueta and Jose Cepero Brito. He arrived at the course by a notification she saw on 23 and P streets. There, she recalled that a journalist of Radio Metropolitana have talked about this kind of course because she had potential.

Even, without having finished the training period, she presented in an audition for a program which would be broadcasted by Radio Liberación at 10: 00 pm. Carlos Riverón, the director choose her and she started working in Onda 1070. This program was part and support of the news programming for the national radio stations. At the same time she use to make news bulletin in Radio Progreso as Su reportera R.P.

It is possible; she was the first woman (1970). Then, she worked in Radio Metropolitana, later she moved to Radio Enciclopedia; a radio station in which she had been but she could not continue because of bureaucratic problems.

At least Radio Enciclopedia, From 1972 this radio station is part of her life and she has been working there for more than 36 years as one of its star radio announcers.

Mirta Aleyda has also worked on television programs such as, Por primera vez which preceded Todo el mundo canta every Friday by Channel 2. She also participated in a program at 12: 00 m, it was daily broadcasted and had the pleasure to share with Ramon Alvarez Viejo, Fernando Alcorta, and Alcides Montoya, all of them experienced radio announcers of our media. She also worked in the National Television News.

For some time programs is that you like doing much in the COCO and has been linked to Radio-Reloj;, all without leaving Radio Enciclopedia. In his concluding summary, this very first level announcer, smile and say

I have a son, a grandson … I like soft music, the sea, cinema, reading, being in love, I love many things and be an announcer. I am member of the UNEAC. Through all these years I have obtained various awards and recognitions, including the Exceptional Award, the Distinguished Raul Gomez-Garcia and most important of all, the love and appreciation from listeners.

Moraima Lopez Leon, the girl from Barajagua who embraced the radio.

Victor Moreno: His legendary work in the radio