Junior student of the Faculty of Mass Media Audiovisual Communication Arts from the Higher Institute of Arts (ISA) Johan Madrigal put all his tenacity and creativeness to produce this audiovisual material as a way of paying tribute “to the uniqueness and the everyday labour of Radio Reloj as seen by the youth.” In the production of this documentary, he was supported by Radio Reloj staff and the Hermanos Saiz Asociation (AHS).

With a crew composed by Ariam Valdes, who edited the documentary; Emilio Polo, who was in charge of the sound effects; and Roger Carballosa, in the photography; young producer Johan venerates the norms of the audiovisual without killing the charm of Radio Reloj, whose main feature is the news read every minute by its talented announcers in texts that are 960-characters long.

Exploring and capturing through the lens the experience, virtues, difficulties and everyday challenges of the radio-station is neither an isolated nor an ocasional event. It arises from the producer’s interest in the history of the Cuban Revolution, a sign of the commitment of the new generation with Cuba’s history, pointed out professor of the Higher Institute of Arts Heidi Grau at the premier.

One of the listeners in the documentary said in an interview that Radio Reloj is life itself, like the heart and if it stops we are lost. The staff of Radio Reloj thanks this message which reinforces their commitment to improve every day. As professor and radio broadcaster Alberto Ajon said “it is the most the most capable radio station to take on the challenge of future because of its brief and concise style, but it should add more emotion, description and narration”.

During 13 minutes, Johan Madrigal portrays his motivation to delve in a key point: the immediacy of Radio Reloj to reflect everyday national and international events. A matter with many angles for analysis and solution that spans from the boldness and professional skills of the staff to their capacity to break the communicative barriers imposed by information sources.

Beyond any flaw in the artistic and technical manufacture, which is understandable regarding the producer’s limited experience in audiovisual products, Johan Madrigal provides the Cuban broadcasting with a valuable material about one of the outstanding radio stations, which has been a school of journalists and announcers; which has been appointed National Outstanding Center for 25 consecutive years, with millions of listeners across the country.

There are many reasons to praise Johan Madrigal’s effort, who confirms through this documentary film that Radio Reloj has kept up with the times along its seventy years of existence, and that it will always do its best to reach the young audiences. 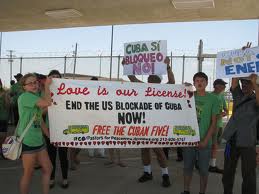 Pastors for peace continue work until end of US Blockade

The Cuban Five: One more year with the people