At that time both looked at the statue. I took my chances  and started interviewing the Apostle …

Q. What does Benito Juarez mean to you?

JM-“That name stands out, as if it were a burnished steel, and it was so indeed, because the great Indian who took him was made of steel, and time  polished it.
Great personalities after disappearing in life, are being accentuated and condensed. ”

Q- He was a beloved man…

JM-“A Juarez, who was hated both life, just now, upon his return to life, who will not kiss his hands gratefully. Other famous men, all words and history, evaporate. The men of act remain, and above all those with the act of love. The act is the dignity of greatness. Juarez broke with his vigorous chest the pushing continental waves over the entire America, and the waves broke, and did not move Juarez. ”

I stop and Marti continues walking. I think about that overwhelming truth:  why were the peoples discovered by Christopher Columbus and other Spaniards, lucky to have our richness looted instead of offering us development? We are not looted and not only those from the Iberian Peninsula. I go ahead and I asked José Martí again.

Q. What were we all about?

JM-”We were just a vision, with an athlete’s chest, the hands of a dandy, and the forehead of a child. We were a mask, in English trousers, a Parisian waistcoat, a North American overcoat, and a Spanish bullfighter’s hat. The Indian, silently, was moving around and was heading for the bush, to the summit to baptize his children”.
Q- And what about the black Africans brought to America as slaves by the Spaniards after exterminating the Indians, tell about them? What about the peasants?

JM-” “The black, under a close vigilance, sang the music of his heart, all alone and unknown, among waves and wild beasts.  The peasants, the creator, revolved around – blind of rage – against the disdainful city, against his creature’.

Q- And the faith?

JM: One must be faithful in the best of man and unfaithful in his worst. One must give way to the best to be revealed and so it prevails over the worst. Otherwise, the worse prevails. Nations should have one special pillory for those inciting them to futile hatreds and another for those who do not tell them the truth timely. There is no racial hatred, because there are no races.

Q-Are there many peoples in America?

JM-“In America there are two peoples, and not more than two,  from their soul, they are diverse due to their origins, history and habits, and similar only in the fundamental identity of man. ”

Q-Could you be more specific?

JM, “Our America in on one side, and all of its peoples are from a similar o equal nature and crib and a e prevailing mixture; on the other side of America that is not ours, whose enmity is not prudent nor feasible to promote, and which, with a firm dignity and clever independence, it is possible and useful to be its friend. But from our soul we must live, away from the bas church, the habits of the master and the undeserved luxury. ”

Q. How should we go?

JM-“Let’s walk our way at a faster path and let’s sweat our diseases. The greatness of our peoples is not meant for their size, or in multiple forms of material comfort, that in all the villages appears as required by them and accumulates in affluent nations, mostly for the special genius of a certain race, for the decoy of profit to satisfy them.
The greatest person is not the one in which unequal and rampant wealth produces raw and sleazy men and women, venal and selfish; a great people, whatever its size, is the one providing pure and generous men and women. The test of every human civilization lies upon the kind of man and woman being produced. ”

Q-You have always believed in love …

JM-” In the pure love, the kind hospitality, the historical confidence, honorable family.  A great salvation. Political issues do not turn the kind character of land into rudeness. One cannot be mean or selfish or rude under a sky so beautiful. The foreigner is examined, he is asked, perhaps there is a doubt but not to be hated.

If he is a man of lineage, he will soon come up accompanied by a beautiful and affable woman; if he is a man of labor, he will soon be in touch with the land of luxurious produce; everything is new, everything is exploitable. For the working man, the smart, the best, the land provides life before it requires him, helpfully, for its needs. My American soil, so much abused and so beautiful! So unknown, so kind, so good! “

Q- You never stop writing, neither thinking nor learning like a child with new notebooks. What do the books mean for José Martí?

JM-” To know how to read is to know how to walk.  Knowing how to write is to know how to climb up. Feet, arms, wings, all these are supplied to man by the first and humble school books.  Plant chemistry and agriculture, and reap greatness and wealth will be collected. A school is a forge of spirit; shame on those peoples without school!, Shame on  he spirits without character. Each new book is a new stone on the altar of our race.”

Q. A final assessment on America?

JM-“We have more natural elements, in these lands of ours from which the Bravo River flows in a rush as far as where Chile ends, not any other land of the Universe, but having less civilizing elements, we are much younger in history, we do not have secular precedent and we were, because we are younger in history,  we do not count on ancient precedence and we, Latin Americans, have been less fortunate in education that any other ;  sad secret-historical memories of many misfortunes that is not the case bring to light …

JM, “Europe looks for products of our soil, which brightens its too many squares.”

Q. You have written more than once you love debates and the rostrum?

JM.  “I love the rostrum, I love it passionately, not for boastful expression of a useless loquacity, but as a kind of apostolate, tenacious, humble and loving, where the amount of grey hair crowning anyone’s head is not a measurement of how much love moves the heart (…) I am proud, indeed, of my love for the people, of my passionate affection of all these lands, ready for a common destiny in an equal manner and with strong pains.”

Q-I know you do not like flattery, more than once you have assured all the world’s glory fits in a kernel of corn. You have said you see the journalist as a soldier, what do you think of the press?

JM, “The press can not be, in these times of creation, a mere vehicle of news, not a mere servant of interest, nor a outlet for the exuberant and lengthy imagination. Press is Vinci and Angelo, creator of the new great and invisible temple, from where the pure man and the gallant priest come from.  Up here the modern human problems glares up along with  the concrete problems of America, and the alarming ambitions and dazzling royal greatness.”

Suddenly I wake up, my guest has gone, but not the 459 page-long essay: “From our America” by José Martí.  He, like Bolivar and Che, has a lot to do to make lots of dreams come true, beyond a simple interview. The Apostle of Cuba and America is a beacon larger than the sun. 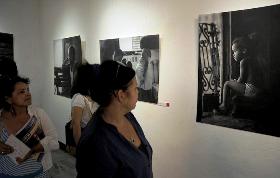 Exhibition of creator women at art gallery in Old Havana

My Children were Born under the US Blockade