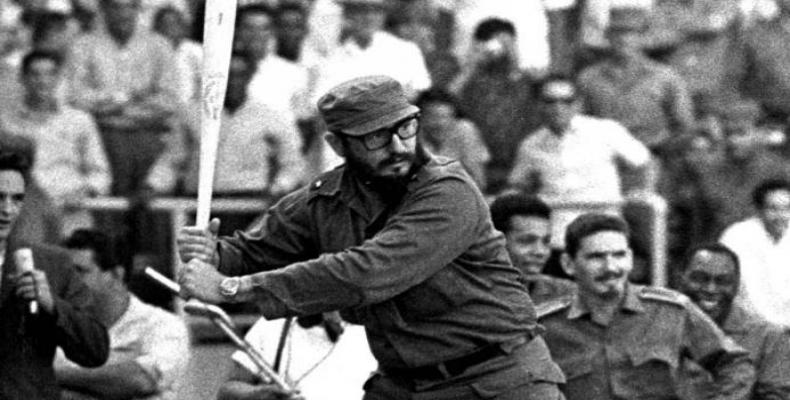 Casanova recalled Fidel’s concern for the development of all sporting disciplines and his eagerness for baseball victories.

He added that it was an honour to have him so close during international events, always wishing the Cuban team to win, and it was a pleasure for all baseball players in that time being able to win as many trophies as possible for him and for all Cuba.

Among other athletes who cite the legacy of the revolutionary leader, the young Yarisley Silva, pole vault world champion in 2015, said that the leader of the Cuban Revolution will continue to be remembered even after he has physically disappeared.

For her, athletes will always have to thank Fidel for their existence, achievements, because without him sports in our country would never have shone.

Also the former head coach of the national women’s judo team for more than 30 years Ronaldo Veitía said that Fidel “was born to win and never to be defeated.

In that sense, he added that Fidel was always an example of a fighter, especially against the strongest imperialism in the world, the United States.

Veitía doesn’t forget the many failed assassination attempts planned against Fidel and believes that every Cuban must be relief that we carry the teachings, the example, and the image of a man that will never really die.

For him, Fidel is no longer physically among us, but a giant like him convinced everybody that he will always be present in each of the victories that we will continue to achieve with his imperishable example.

The legendary Argentine soccer player Diego Maradona felt an indescribable pain when he heard about the death of his close friend Fidel Castro and recalled the former Cuban president as a revolutionary politician who risked his life for his people.

For Maradona he was the greatest because he knew everything, Fidel anticipated things and gave the people what the people deserved.

Through an interview to DPA from the Arena Zagreb, where he is encouraging Argentina in the final of the tennis Davis Cup Maradona, one of the greatest soccer players of all time spoke of his relationship with Fidel Castro and the years he spent in Havana detoxifying from his drugs issues.

He remembered with affection those endless late night telephone conversations with the leader of the Cuban revolution.

El Pelusa, who will travel to Cuba really soon, wears a tattoo of Fidel Castro on his left leg, one of the best left-handers in history.

Matanzas’ team coach and leader in the current classification of the Cuban baseball championship shared his impressions on the death of the historical leader of the Cuban revolution.

I spent a lot of time by his side and now I feel sad, very sad, it is one of the hardest news we have received in recent years. I have no doubt that it fell like a bomb in the whole Cuban sports family.

Back in Matanzas, my players were crying on the bus, with a feeling of great pessimism.

I had to give them the courage to go ahead, and we can do it by giving a better show to the people, playing better baseball and always defending Cuba anywhere in the world.
Similar feelings were expressed by Roger Machado, manager of the Tigers of Ciego de Ávila.

We were at the hotel on Friday night after playing against Villa Clara, and we received the news as a very hard blow.

Fidel was 90 years old, but we were surprised. The whole team gathered shortly after midnight to hear Raul’s words, and it was very shocking.

For Roger Machado, one of the most influential leaders of the twentieth century has gone, and we now have to go ahead and give continuity to his ideas, his principles.

For his part, pitcher Oscar Gil, remembered as one of the heroes of the only baseball title in Holguin, and current coach of the Holguin team expressed that his team had cut a negative streak of many losses with two consecutive victories, but on Saturday morning we were collapsed, sore, we could hardly speak.

It was something for which no one was prepared, because we thought that Fidel would be eternal, but in a certain way he will always be with us.

Oswaldo Guayasamín in our memory

To Nila Sánchez Cuban Radio is her greatest love