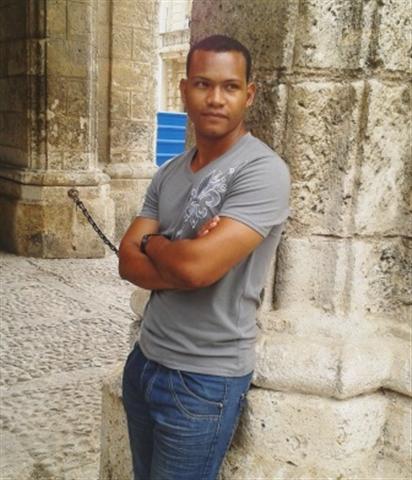 Dialogue with the actor and writer Yolexis Martínez Mayeta becomes an ineffable pleasure for those of us who practice cultural journalism. Graduated from the National School of Art Instructors in the specialty of acting, the young artist is a member of the Association of Performing Arts of the Union of Writers and Artists of Cuba (UNEAC).During his fruitful artistic-professional career, he has joined several theatrical groups, while, in 1999, he joined the Cuban Institute of Radio and Television (ICRT) as an actor, where he has worked both on the radio and on the small screen. He is the author of scripts for the television show Busca Buscando (Educational Channel 2) and Una calle, mil camino (CubaVisión Channel), and for the radio programs Clave 8:30 , Aventuras , En Nine Minutes , Special Agent , El Cuento, Teatro and Cuban Novel (Radio Progress).

Due to the aesthetic-artistic quality of the acting and literary work developed by Yolexis Martínez Mayeta, she has received various national awards and recognitions.

What were the motivational factors that inclined your vocation towards the performing arts in general, and specifically towards acting?

I don’t think there was a determining motivational factor. I think it was fate, I am an artist by chance spells. That other door that opens when you believe that there is no other way and you feel like a shadow in a world of light […], so to speak.

At first, I wanted to be a military man. I had a good academic index and had passed all the exams to be able to enter the “Camilo Cienfuegos” Military School, back in my native province: Santiago de Cuba. But when they carry out the medical examination, they discover that I had glaucoma; visual condition that I was unaware of; for that reason, I was denied entry to the Camilitos. I felt that the world “swallowed” me. I saw all my illusions disappear in the blink of an eye.

I remember that a classmate, in junior high school, was part of a theater group created in that educational center. The base guide and person in charge of said group, went one day to look for him for a rehearsal and he was not there. She asked if anyone dared to replace him, and I, who after failing in the military career, the last thing I wanted was to be in the classroom, raised my hand.

The play was Abdala and he didn’t do much. A simple soldier who the only thing he said in the whole work was: «Salud, Abdala». As a curious fact, over the years, once settled in Havana, I began to be treated at what is today the Institute of Ophthalmology, and the specialists ruled that what I have is a simple suspicion of glaucoma. Nothing, as the saying goes: “what comes smooth, does not bring wrinkles”. Military life was not for me.

You have ventured into theater, radio, television and cinema. Which of these means do you prefer and why?

Yes, look, despite not having been able to do everything I want and dream of yet, I consider myself a lucky person, since —at least— I have taken a few steps in those four very important media. All of them, with their respective peculiarities and specificities, have their own magic and a very peculiar way of falling in love. But, without a doubt for me, a top place and to which I owe what little or how much I know, and in which I have had the most opportunity to unfold, is the radio, an important means of communication that is turning one hundred years old! Radio is wonderful, also the least valued, but as comprehensive, conservative and instructive […] as any of the other media. For that reason, I am a radio artist.

The radio tests your imaginative capacity and the quality of the wood that underpins your talent. The radio has taught me to see with sounds. It is a pity that many blind people, with good eyesight and long range, do not admit and even try to overshadow that light that radiates “the sound to see”, as the laureate Manolo Ortega, National Television Award winner, described the radio.

What does it mean for you as an acting professional to belong to the UNEAC Association of Performing Arts?

It means a big commitment. The responsibility of knowing how to do things well so that other young people, with similar concerns, see in said institution the necessary tool to make their desires viable and feel the support of an association that always raises culture as its flag, «shield and sword of the nation Cuban”, in the words of Commander Fidel Castro Ruz (1926-2016), historical leader of the Cuban Revolution.

According to your personal assessment, what are the main defects of dramatized spaces, both on airwaves and on the small screen, as well as the best ways to eliminate them?

I think that the lack of material resources is always blamed, as well as the economic problems that affect us. That is an undeniable truth. But, let evil not exterminate the environment. Great and very worthy things can be done with no more resources than the will to create an aesthetic-artistic product that dignifies creative truth and the respect that the public deserves.

Sometimes the scripts are weak, the execution poor and the cast, which is almost always the same, is not entirely successful. You have to create and search well, with your eyes open, to optimize the quality of the work regardless of the genre to which it belongs. There are many who know how to do more and better with less. You must find a way to tell interesting stories with as much or as little as you have. The public deserves it and will surely appreciate it.

Of the anecdotes, experiences and experiences accumulated in your mnemic file during the exercise of your profession, could you relate any that have left an imprint on your mind and soul?

Recently, I had the immense privilege of working with maestro Fernando Pérez, National Film Award, on his most recent film: The last days in Havana or Chupa pirulí , premiered at the Young Film Festival of the Cuban Institute of Art and Industry Cinematographic (ICAIC) What a human quality, what a genius person. He knows how to ask and say without hurting. Respect everyone equally, from the person in charge of carrying the water to the extra who passes by and remains silent. I remember that when I arrived to do the casting,He greeted me as if we had known each other all our lives and even thanked me for having agreed to participate in the filming of that feature film. I believe, for many reasons and above all because of his work, that, as you rightly say, he is the “King Midas of Cuban cinematography”, without haggling merits from other filmmakers.

Could you summarize what you have done so far in the field of acting?

I have done radio and everything that has appeared. Right now, I am starring in various spaces in Onda de la Alegría, specifically in Clave 8.30 , Aventuras and La Novela de las Dos . I was also part of the cast that recorded the last season of the well-liked police television series UNO , and I also wrote the script and recorded an audiovisual for the space Una calle, mil camino , which has been broadcast on El Canal de Todos for some time.

Do you want to add something so that you do not have anything left in the inkwell?
Advise or recommend to young people who start in the fascinating world of acting that they feel what they do and give themselves to it in body, mind and soul, so that the public believes in what we offer with love and respect […] . And something very important: it is a legitimate pride for me to be a member of the artistic cast of Radio Progreso, a national station that, next December, will celebrate 93 years on the air.