Carbon was for many years the distinguished announcer of program Asi of Radio Rebelde. He is considered one of the best announcers of the Cuban Radio..

Francisco Rafael Carbon Yarizales, or simply Franco Carbon was born on October 4, 1935, at Lobo neighborhood in the town of Banes, Holguin, he spend his childhood passes among the farm labor and the study of reading and writing, the subjects which  were taught by his parents.

In 1957 he finished the high school and moved to the city of Havana in order to study medicine, seeking his financial support began working as an insurance salesman and then moved to work in a bank, where he serves as sub counter.

During this stage he could do his test for being announcer, presenting to it and approving it, during the course of these years he studied Art History at the University of Havana.

He was granted with several awards, diplomas, and medals including the Medal for the 80th Anniversary of Radio, Medal of the 55th Anniversary of the CTC, the microphone delivered by the Cuban Radio and Distinction for National Culture.

His remains will be cremated and the ashes exposed on Monday 14 July, between the hours of 9 am to 12 noon in the Room H of Calzada and K for the people to render professional posthumous tribute to this dear.

The speech: the everlasting word 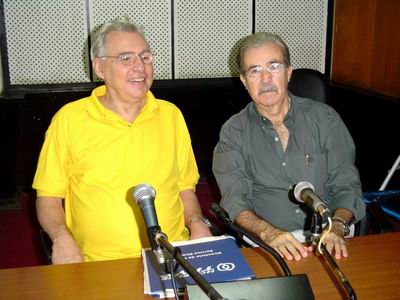 Cuban Radio: The Voice of the Journalists and Announcers